It has been almost 5 months that our Country is dealing with this pandemic. However, offlate the growth in Covid positive cases have been significant, and sometimes looking at the numbers might be a bit too scary! Nevertheless, a known devil is always better than an unknown angel! So, I have tried to jot down few basic parameters that I have been keeping a tab on. The numbers used are based on the data available on https://www.covid19india.org/

Basic figures that are being tracked by multiple agencies include number of tests, confirmed covid positive cases, active cases, recovered cases, and fatalities.

Then, based on these numbers, other data which is being tracked include:

So first let’s start with a basic view of these trackers. 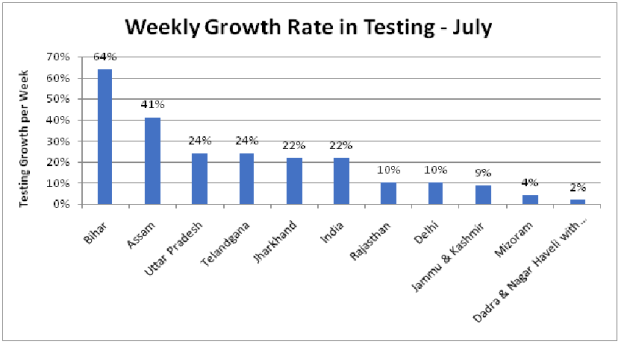 2. Confirmed Cases: Confirmed cases in India have grown at a much higher rate. Minimum growth rate observed in past 16 weeks was 23% and that too in the week ended on 08/08/2020! Although, growth rate of confirmed cases has reduced to 23% from as high as 52% in second week of May, but it still is not a reason to rejoice given the fact that we are already sitting at a huge number of 21.57 lakh cases, which implies that even a meagre growth of 10% would mean more than 2 lakh new cases per week! Further, another reason for concern is that the growth rate in testing is still lower than growth rate of Confirmed cases. Crudely put, the Covid-19 virus is still outrunning our efforts to contain it!Minimum and maximum CAGRs witnessed by few states in last 4 weeks along with India’s CAGR are detailed below: 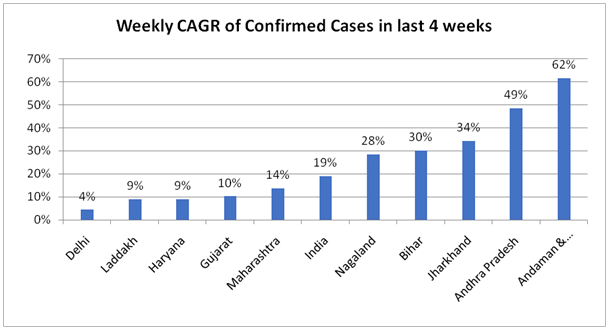 Sad thing to notice here is that, now the virus is spreading quite rapidly in non metro areas as well!

3. Confirmed Ratio: There is a dual significance of this ratio. First, lower ratio implies that number of tests being conducted are effectively capturing the actual outbreak in the region. Secondly, a decline in ratio over time signifies improvement either in restricting the outbreak or in accelerating the testing efforts.
The ratio has been continuously deteriorating for the Country. The ratio was at a minimum of almost 3.82% in May starting, which has now deteriorated to 8.95% as on 08/08/2020!

5 states with highest (worst) confirmed ratio as on August 08, 2020 vis-à-vis worst position witnessed by them is detailed below:

Except Puducherry and Karnataka, all these states/UTs have started witnessing decline in the ratio.

States/ UTs which are already past their worst confirmed ratio as on 08.08.2020 are Maharashtra, Telangana, Delhi, Bihar, Ladakh, Gujarat, Assam, Madhya Pradesh, Punjab, and Mizoram.

4. Active Cases: In India, total active cases have been growing at an average growth rate of 26%, which has reduced to about 11% in last week ended 08.08.2020! Thankfully, growth rate of active cases has been negative for Jammu & Kashmir, Tamil Nadu, Dadar & Nagar Haveli and Daman & Diu, Arunachal Pradesh, Maharashtra and Meghalaya! Further, among the cities most infected by the virus, Mumbai, Thane and Chennai, all have witnessed negative growth rate in last three weeks! Worst (maximum) growth has been observed in the states of Andaman & Nicobar, Assam, Manipur, Nagaland, Mizoram and Bihar! Top 5 active states with highest cases are still Maharashtra, Andhra Pradesh, Karnataka, Tamil Nadu & Uttar Pradesh.

5. Active Ratio: This ratio depicts active cases as on date vis-à-vis cumulative confirmed cases till date. Personally, I feel, only significance of the ratio is to depict the level of outbreak as on date. Higher the ratio, it depicts that Covid outbreak in the state is quite recent, however, lower active ratio might be on account of high recovery ratio or high mortality ratio. States having Active ratio of more than 50% as on 08/08/2020 are Nagaland, Andaman & Nicobar, Meghalaya, Jharkhand, Sikkim, and Mizoram depicting that the outbreak in these states is quite recent! Among these states, Andaman & Nicobar, Nagaland, and Jharkhand have among the highest growth rates in confirmed cases as detailed above.

6. Recovered Ratio: Total recovery ratio for the country has increased to 69%. Top-6 and Bottom-6 states/ UTs in this aspect are highlighted below: 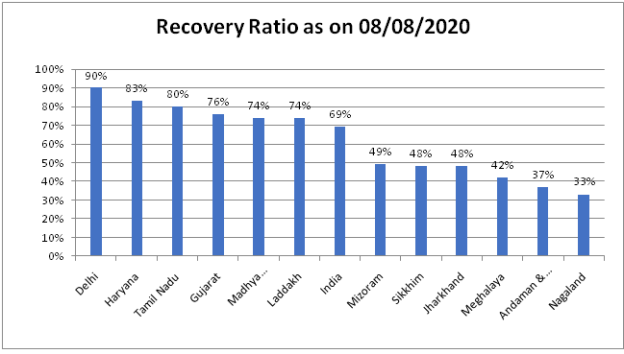 Among the worst affected cities, Chennai’s Recovery ratio is most promising (after Delhi) as on date at 87%, followed by Mumbai (78%) and Thane (75%). Lower recovery ratio is almost in line with higher Active Ratio!

7. Mortality Ratio: World average of Mortality ratio due to Covid 19 stands at about 3.70%, which, for India is 2.02%. Highest mortality ratio for India was on May 05, 2020 at 3.43%. Significant decline in this ratio can be attributed to constant efforts of healthcare workers. Another significant reason could be outbreak of Covid-19 in non metro areas, where people are presumed to have better immunity as compared to people in metro cities. States having mortality ratio higher than country average are detailed below:

Mortality rates in Karnataka, Tamil Nadu, and Andhra Pradesh, which are among 5 most infected states along with Maharashtra and Delhi, are significantly lower at 1.80%, 1.65%, and 0.89% respectively. Mortality ratios have been continually declining on a weekly basis for past 7 weeks for the states of Delhi, Gujarat, Haryana, Kerala, Madhya Pradesh, Maharashtra, Rajasthan, Telangana, Uttar Pradesh, and West Bengal.
On the contrary, mortality ratios have worsened in last 4 weeks for the states of Jammu & Kashmir, Puducherry, Andaman & Nicobar, Goa, Chhattisgarh, Tripura &Ladakh.

These are the basic numbers which are generally being used to track the outbreak of pandemic in the country. A trend which can be made out from this data can be summarized as:

There are still a large number of parameters, which when considered might give an entirely different view, since some of the assumptions in above analysis include an even outbreak in entire state. Further, based on the numbers/ ratios discussed above, it is still a bit difficult to do a predictive analysis, however, I will try to work on a predictive analysis in my next post.

While we were busy dealing with our trivial issues, somewhere few communities were brainstorming about sudden changes of their ecosystem! I was able to lay hands on few of the meeting agendas! END_OF_DOCUMENT_TOKEN_TO_BE_REPLACED

“Rivet” was a simple solution by Adolf Hitler for reducing weight of his ships to carry more men and ammunition during World War! Similarly, T-shirt was designed by “The Copper Underwear Company” targeting Bachelors, since inherent problem with shirts was ripping of buttons and stitching & sewing was considered work of fairer sex! These are just two examples of innovations done by us, to simplify our lives! I am sure there are numerous such examples!

T-shirts or rivets were designed to help just a few people and still had such a huge impact going forward! However, Covid-19 has impacted not just an organization, community or country, but entire world! Along with battling the virus, people around the globe are trying their best to function even when their entire social and professional ecosystems have gone for a toss! This pandemic has catalyzed innovation processes by organizations as well as individuals!

Some of these changes might be temporary; however few of them will change in entirety the way we have been living (not just working)! Although it’s difficult to make an exhaustive list of such changes, but few of them are mentioned below!

As 21-90 rule states, it takes a commitment of 21 days for us to make a habit and 90 days to accept it as our lifestyle; so, let us see what sort of habits, lifestyles and innovations we emerge with as we overcome this Corona crisis!

“Survival of the fittest”

These quotes highlight the importance of physical, mental and emotional strength for individuals. But, the same applies, not just to individuals, but also to entire societies or nations as well. The same is quite evident right now, at a time when all the nations across the World are trying to survive Covid-19! END_OF_DOCUMENT_TOKEN_TO_BE_REPLACED 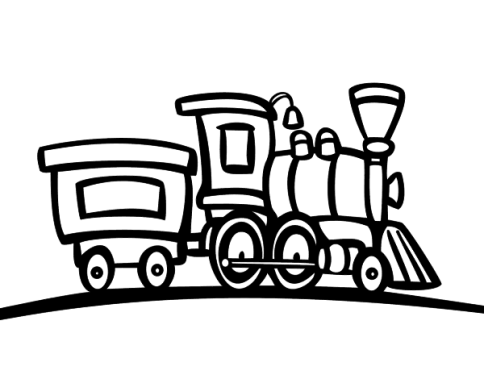 Travelling alone from Jabalpur to Rajkot, which is 28 hour ride by train, and that too when your ticket is under RAC (you only have half of the seat) definitely leaves you with a lot of time!

And so, I was fully prepared to confront those 28 hours…I had a phone with two seasons of Lost, 3 movies, more than 1000 unsolved Kakuro and Sudoku puzzles, a fully charged 13000 mAh power bank, a charger, and quite a lot of songs, and of course a book on Sociology, which I knew I might not even open! And of course I planned on spending some quality time on whatsapp as it’s been long since I had a chat with many of my friends!

As the train started rolling, I arranged  END_OF_DOCUMENT_TOKEN_TO_BE_REPLACED

Outside his apartment. Clueless and lost he stared into the sky for some answers. Life felt like a vicious circle!?

Noraiz stuck the lonely face and breeze dried away his tears. Everything seemed to fall in place.

All it took was…

END_OF_DOCUMENT_TOKEN_TO_BE_REPLACED

She broke her barbie while playing and scared of scolding asked her neighbor to fix it.

Next noon when she woke, Barbie was all fixed…but she was bleeding and bite marks were now sore.

Now whom should she ask to fix herself? At what cost?

30.718921 76.749587
Ok…bbye…good night… and haan…do stay in touch..!!
On this note Ambrish ended our conversation… a conversation dated around 2-3 years back…and since then we have been busy in dealing with our individual problems… or maybe enjoying the things that came our way… or maybe something else… however  “do stay in touch” faded away somewhere…

END_OF_DOCUMENT_TOKEN_TO_BE_REPLACED

Today…it was the third time…I streamed the documentary to see it…and then I did the same mistake again… I somehow recalled all the news about it…I recalled all the details I read about things that were done to her… and “thought” about the agony she might have faced in reality!!!

END_OF_DOCUMENT_TOKEN_TO_BE_REPLACED

Kids, I have seen some really good times…there was a time when men and women…children and elderly…all used to flock around me and even fight with each other just to be with me! It was the golden era for me, when rather than listening or talking to anyone else, all used to silently sit around me and hear what all I had to say.